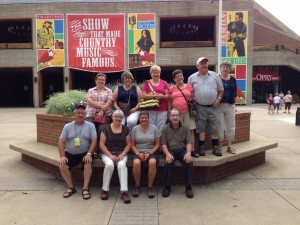 Hi Folks
We are about finished day 6 and all is well. The weather has been warm, and although there have been some showers they haven’t affected any of our activities.
We had a very busy day in Nashville on Saturday, but managed to attend all the events including the Midnite Jamboree. Our Back Stage tour at the Opry worked out well and everyone got their picture taken standing in the magic circle centre stage, some even sang on the stage.
Jim Ed Brown was celebrating 50 years on the Grand Ole Opry and along with hosting a segment on the Opry show he also hosted the Midnite Jamboree. Everyone had a chance to have a piece of the 302 pound cake they had at the Midnite Jamboree to celebrate the event.
There was another little blond headed girl on the Opry, who seemed to attract a lot of attention, I believe her name was Carrie Underwood 😉
Sunday we made a stop at a huge Flea Market in Sevierville on our way to Pigeon Forge and after check in at the motel attended the Dixie Stampede Dinner show.
Today was the perfect day for Dollywood, a bit warm, but that made the water rides more inviting. We are trying to play the young folks out but it isn’t working:) A lot of good shows though, and we all had a train ride. We went to the Comedy Barn tonight.
Tomorrow we have a couple of shows and some more shopping time.
Garold

We just got word that Murray Paris passed away last night or early this morning. He was in hospital in Fredericton. We don’t have the arrangements yet but will pass them along.

Murray was a long time member of our group and played guitar and sang. He sang many of the old Wilf Carter songs, plus a lot of the old cowboy songs and all from memory. The Old Blue Pot, the Balogna song, the Fishing License, and the Trading Stamp songs were just a few of his most requested. One of my favorites was When the Works all done this Fall, and another was Papa’s Wagon.
The one thing we remember most about Murray was no matter what you were doing or how bad things were going, he always seemed to be having a good time.

It is with heavy hearts that we annouce the passing of Murray Christie Paris of Tilley, NB at the age of 91. Murray passed away peacefully with his family by his side at the Dr. Everett Chalmers Regional Hospital on May 22, 2013.

Murray was a veteran of the Second World War and a member of the Royal Canadian Legion, Branch 36. He was also a member of the Knights of Columbus, Council 6414. Murray took great pride in music, wood crafts, story telling, St. Joseph’s Catholic Church, friends and his family.

Resting at Brunswick Funeral Home with visitation on Friday 2-4 and 7-9 pm. Funeral service will be held on Saturday, May 25, 2013 at 11 am from St. Mary of the Angels Catholic Church. Father Gilbert Doddatto celebrating. Interment will be in the adjoining cemetery.

There will be a Legion Memorial Service held at the funeral home Friday evening at 7 pm.

For those who wish, donations to the Southern Victoria Cancer Assistance Fund or to a charity of your choice would be appreciated by the family. 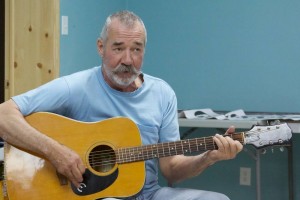 We had a nice visit from Garold’s brother, Donald, on the first of May.  He played and sang for the fiddlers. I’d know him anywhere–must be the beard.

Hi everyone
Just a reminder for Monty & Helens Fiddle-Doo tomorrow at 2 PM, Masonic Hall in Woodstock. Lots of music and a potluck supper, bring your pot of beans and come for the day. This is a new location, 211 Neilson St.

Take the Connell Rd exit and travel toward to centre of town. At the third traffic light (Tim Hortons) go left on Deakin Dr and follow it to the light at Main St. Turn left at the light and Neilson St is the second street on your left.
I keep thinking that Tim Hortons may be the fourth traffic light, at any rate, turn left at Tim Hortons and you will be good 🙂
Garold 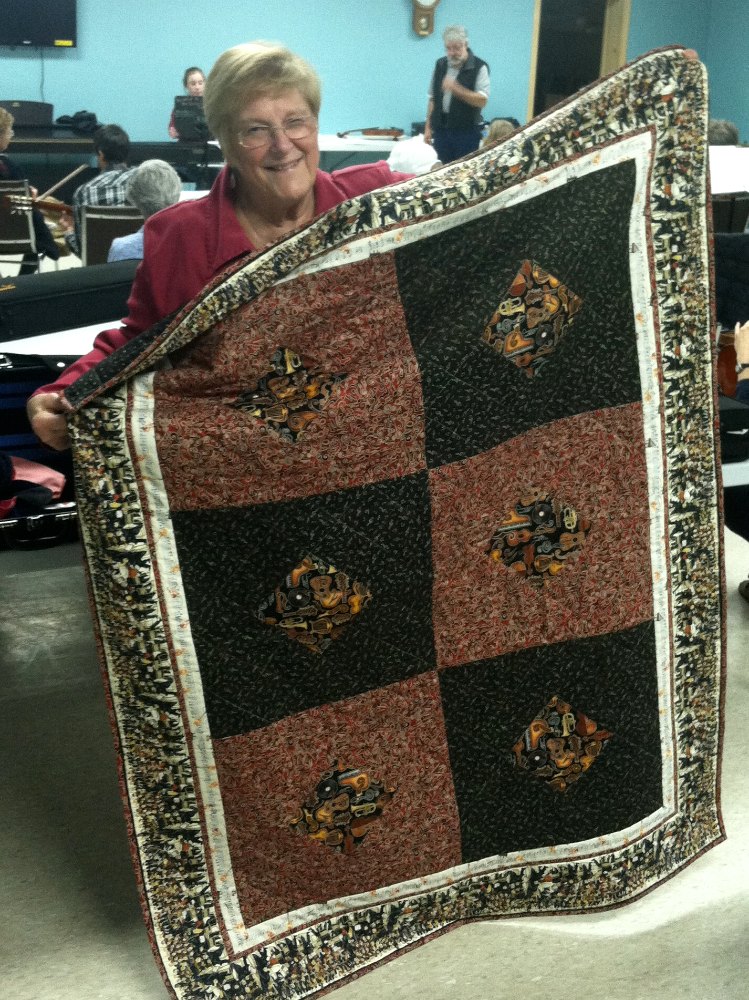 We did our quilt draw on Wednesday, July 16, 2013, at the jam and Helena McCarthy was the winner. Helena lives just down the road from us and Kelly Morin sold the winning ticket.   Crafted and donated by Cari Grierson.

Amos’s funeral will be Monday at 2 PM at St James, the church where we meet on Wednesdays. They would like some of the fiddlers to play at the reception following the service, which will be in the church hall, if you can attend please do.
They want more of the tunes Amos would have liked and played. I know he liked the Little Burnt Potato, Florence Killens Waltz & Carol Kennedys Waltz, The Black Velvet Band & Wearing of the Green. We could also do his Perth-Andover Clog, and just some of the old fiddle tunes that everyone knows. Here is some music, not all have tab but do what you can.
Another of his favorites was Whistlin Rufus but I don’t have it written down and we wouldn’t have time to learn it. If you know of any other tunes he liked, let me know and we will try to dig up the music and do them.
We are still planning to attend the wake tomorrow afternoon at 2:30, and some of you have said you are coming so hope to see you then. Not sure if the weather is going to cooperate or not.

Hi folks
Here is what we came up with for a Nashville/Pigeon Forge bus trip. Look this over and let me know if you are interested. We have to start preparing a list to see if we have enough people to do the trip. We also have to purchase Opry tickets right away to be safe. Members of the fiddle group will be listed first, then we will finish filling the bus with others.

Not Included
Note: The following are not included in the trip price but are things we may want to do.

Nashville
We can visit the Country Music Hall of Fame, with 15 or more we can get a group price which as I recall was very reasonable in the $10 to $12 range.
Also a guided tour of the Ryman, again with a group in the $10 to $12
Our Motel is very short walk from the Midnite Jamboree Theatre again very reasonable admission.
For the shoppers our motel is walking distance from an outlet mall and only 5 minutes from the Opry Mill, another very large shopping centre.

Pigeon Forge
We attend a large Flea market on Sunday afternoon.
Dollywood is not included in trip price and is in the $40 to $45 range for the day. This price includes all the rides, shows, everything but food. In buying group tickets we get three complimentary tickets and last time we divided the total cost by the number of people and it worked out to around $41 each.

Hello everyone
And as the song says
We wish you a Merry Christmas and a Happy New Year. END_OF_DOCUMENT_TOKEN_TO_BE_REPLACED 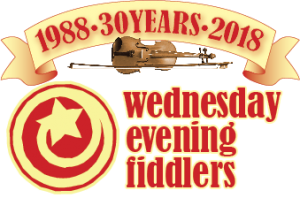 We’re getting back on our fiddling feet. Come join us, with you mask, at our Wednesday jam session—7pm. We are also doing public appearances by request.–Bill